Into the Void is a strategy game for android

Fully command your faction in this sci-fi game.
Build your fleet, arm it with tons of weapons and make all of your enemies’ burn.
Perform expeditions to outer space; take care of your crew’s morale as it greatly influences your power.
Research tons of techs. You can’t open all of them in one play-through, as there are lots of combinations.
Fight with different opponents. Each faction has its own tactics and technology stack, so you should plan your fleet equipment carefully.

✔ Great RPG/TBS mix with unique depth.
✔ Randomly generated universe – each mission is unique every time you play it.
✔ Long and interesting storyline.
✔ Battle against 4 different factions.
✔ Epic space turn-based battles.
✔ Laser, Kinetic, Plasma and Explosive weapons: each with unique pros and cons.
✔ 16 main missions
✔ 20 sub-missions
✔ Lots of battle ships with modifications
✔ Over 100 technologies in 4 different branches – choose them wisely.
✔ Tons of different items, from engines and shields to drones and infiltration squads.
✔ ABSOLUTELY no in-apps.
✔ Great visuals
As the game is just released, it can contain some bugs and problems. Feel free to mail us and we will fix it in 24h. 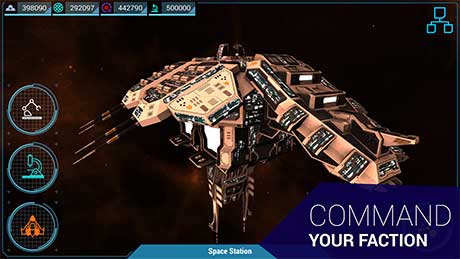