ACTION PACKED OFF-ROAD RACING TO THE MAX!
Get engaged in 3D ultimate race battles, fire rockets and use the protective shield to counter the attack from the enemy. Nitro Boost is mandatory! Collect turbo while you hit that gas pedal and leave all other race cars behind. You decide the rules on the track while you drift, drag, bump, collide, fire and overtake to finish first!

FAST ACTION RACING IN 3D
Monster trucks, roaring engines, smoking tires, damaging collisions, and above all Speed! R.A.C.E. – Rocket Arena Car Extreme – is full of epic explosions, destruction and effects. Press nitro – get even more adrenaline, and let your enemies breathe dust. The change of day and night, the neon signs and tricks will never let you get bored. If you like to play with beautiful graphics and no brakes, then this is your race car game of choice! You can change the graphics settings to improve the gameplay quality and smoothness.

THE ULTIMATE RACE BATTLE EXPERIENCE
Your Monster Truck, your arena, your rules! Participate in Arena battles and get straight in to the real action. Burn out your enemies in the derby arena and race them into fire traps, huge morgensterns, chainsaws and other destructive obstacles. This race game is like a real action movie! Rocket Arena Car Extreme (R.A.C.E.) is a burning cocktail of survival races and battles on wheels.

VARIOUS BATTLE LOCATIONS
Participate in battles of different historical epochs! Experience the thrill of driving under steep cliffs and get away from sand storms. Explore ancient Egyptian ruins and other wonders of the world. Set your foot on the road of outrage in an attempt to find what you cherish most!

THE BEST ENEMY IS THE BEATEN ENEMY
Select the right truck for every battle! Crazy and dangerous driving is a good thing in this racing game because risks are needed to beat your enemies. Choose a weapon to your liking: missiles, bombs, machine guns, and various electric weapons. Slow down time and wipe out enemies. Harness your winner’s mentality and guide a flock of cruise missiles towards the evil race gangs on the race track.

BEST ARENA RACE VEHICLES
Win action-packed races and earn rewards to collect your ultimate off-road race car. Make the most out of the vehicles available to you. You will find American muscle cars, European classics and Japanese drift vehicles! Each car is equipped with everything you may need to inflict the maximal damage to your opponents. Those monsters on wheels will cope with any off-road conditions. They will melt the asphalt on their way to fury.

VEHICLES LEVEL-UP SYSTEM
Each vehicle may be levelled up as high as level 30. When a vehicle is levelled up to levels 10, 20 and 30, it gains unique body kits that improve race and battle performance even more.

DECIDE YOUR PREFERRED CONTROLS
Choice between five types of controls so you decide which way of playing the game suits best to win those crazy battle races.

NO GASOLINE AND OTHER HINDRANCES
Endless monster truck racing with no energy systems to stop the fun! Have you ever wondered if the tank is half full or half empty? The positive attitude rules in this action game – the tank is always full. No need to wait for several hours to restore energy for your car to start racing. You can always rush at full throttle without any limits!

THE BATTLE ROYALE RACING GAME – ONE AGAINST ALL
Get prepared to battle for the rank. Many players fight to become the first one and to grab the main reward – the all-time champion title.

MUSIC DESIGNED TO FEEL THE RACING EXPERIENCE
Enjoy the specially designed music to feel the excitement of the spectacular speed and explosive competition during the races.

REALISTIC 3D GRAPHICS
You can change the graphics settings to improve the gameplay quality and smoothness. 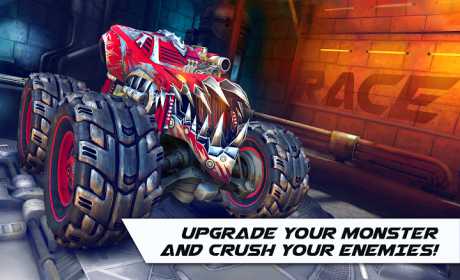 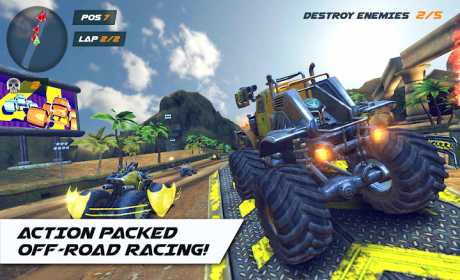 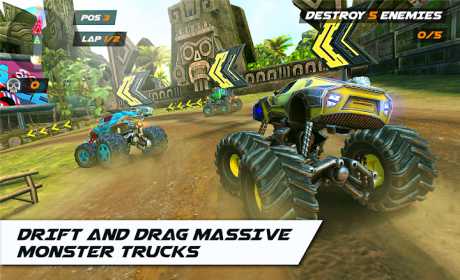