Finally, CRAZY CHICKEN strikes back! Get set, aim, fire… and never neglect your own cover. Fight against the AI, your friends … or your enemies! Pure CRAZY CHICKEN action!

CONTENTS
• Action: Aim and hit with a variety of weapons and magic!
• Construction: Build your own castle complete with walls, shields, towers, cannons, catapults, or mighty mages!
• Defense: Turn your Scottish CRAZY CHICKEN clan’s residence into an impregnable fortress!
• Progression: Upgrade your castle and weapons by up to 18 levels!
• Single-player: Pursue the evil Clan Chief and defeat him in epic battles!
• Multiplayer: Compete against players from around the world and win gold and trophies across all platforms.
• Live duels: Challenge your friends directly and fight for glory… and gold!
• Cunning: Try to secretly rob other players.
• Recognition: Let everyone see what you’ve got in the high-score table.

CRAZY CHICKEN returns to its Scottish residence only to find that an unpleasant Clan Chief has made himself at home there in its absence. This shady character has abducted a maiden, and CRAZY CHICKEN begins its adventurous quest to rescue her. A battle for territory and castles begins – and for the fair maiden, of course!

The game features an extensive single-player campaign, as well as several multiplayer options – for all gamers who enjoy competing with real-life opponents as well.

“CRAZY CHICKEN strikes back” does not include in-app purchases or any other hidden costs. You can play the campaign and multiplayer modes as often as you wish, for an unlimited time.

Cross-platform: All multiplayer modes support cross-platform gaming, allowing you to challenge and take loot from your friends on different devices and platforms, including PC.

Single-player: Fit out the seat of your clan to build a mighty and prestigious fortress, and upgrade it continuously with better weapons and defense facilities. Pursue the evil Clan Chief from one battle to another, and grow stronger and more powerful. You start out with a small shack, but you will soon be able to improve and expand each element of your residence. Eventually, you will become the lord of an extensive castle, able to withstand heavier attacks.

Live multiplayer: Play fast, action-packed live duels against your friends or random opponents from all around the world. Just agree on a password, and you are ready to play – across different devices and platforms. It’s simple and completely problem-free.

Looting: Catch your opponents off-guard by attacking and stealing from them whenever you want.

Community: With more than 15 million copies sold, CRAZY CHICKEN (AKA Moorhuhn) is the best-known and most successful German game character. With “CRAZY CHICKEN strikes back”, the Chicken opens a new chapter and hits the charts once again. Join the large Crazy Chicken community! Follow us on Facebook. 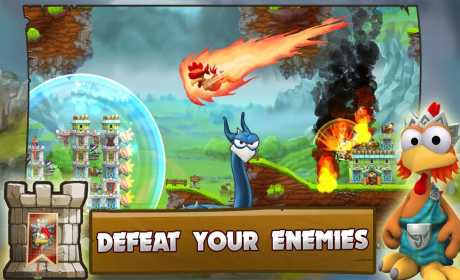 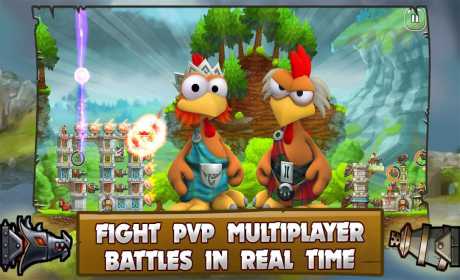 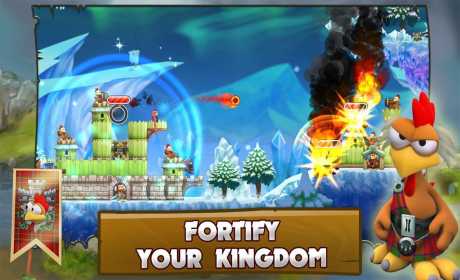