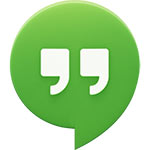 Hangouts is an app with the objective to facilitate direct and immediate communication between two users.
Download Hangouts

You can Download This Apps ( Hangouts ) From Revdl With High Speed Servers .  Google+ Hangouts is a messaging app that lets you send and receive messages, photos and videos, and even start free video calls — one-on-one or with a group!

● Send and receive both Hangouts and text messages (SMS/MMS) and easily switch between message types.
● Include all your friends with group Hangouts and MMS conversations.
● Say more with photos, emoji, and animated GIFs.
● Turn any conversation into a free group video call with up to 10 friends.
● Use Hangouts to connect with friends on computers, Android and Apple devices.
● Easily share Maps locations and People contacts with your friends.
● Message friends anytime, even if they’re not connected right now.

Notes:
● Unlike Google Talk, Hangouts does not support “invisible” status. 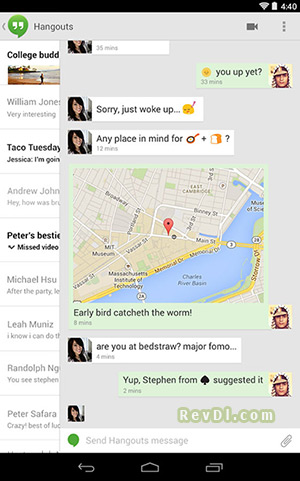