Wrestling Revolution 3D is a Sports Game for Android

Wrestling Revolution 3D is a 3 game where players should control dozens of different fighters in loads of different events.
Download Wrestling Revolution 3D
Wrestling Revolution is now the biggest 3D wrestling sim IN and OUT of the ring – featuring BOTH aspects of the business in ONE shared universe for the first time ever! A wrestling career challenges you to take shots in the ring, whereas a “booking” career allows you to call the shots backstage – promoting entertaining matches every week for ratings. Seeing each side of the curtain gives you an even better appreciation for the other, and ensures you’ll never grow bored of wrestling again! Both modes are available to play for free, with the option to upgrade to enjoy the “Pro” experience with no ads or limitations.

And if playing Pro isn’t enough, a separate “Backstage Pass” allows you to play God by saving your changes to all 9 rosters before pitting your immortals against each other in dream matches of your own creation! With 4 pages of rules to mix & match – including up to 20 wrestlers in rings of any shape or size – the only limit is your imagination. You can also blow off steam with no pressure by revisiting the 8 weeks of supercards from the game’s promotional tour. Not to mention the interactive training process that teaches you how to lock up in the first place.

BASIC CONTROLS
The game features an interactive tutorial that you are advised to play through, but the basic controls are as follows:
CURSORS = Movement (double-tap to dash)
A = Attack (with a direction to aim high, without to aim low)
G = Grapple
R = Run
P = Pick-Up / Drop (with a direction to throw) 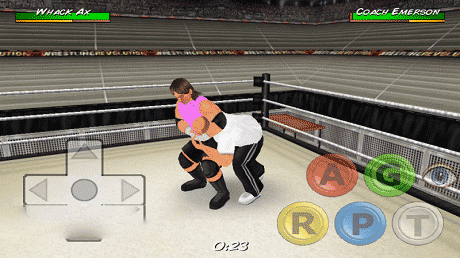 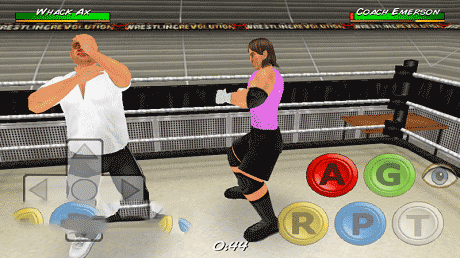 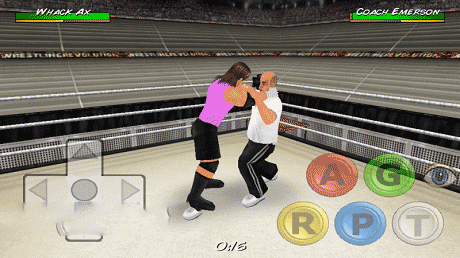