It’s the last match of the League and you are in a drawn. It’s your turn to choose the destiny of your soccer team. Fit your boots, run for the ball, make a powerful kick and… GOAL! Will you triumph as a soccer player and become the real score hero of your club? Will you be the football legend of this season?

LEAGUES AND DIVISIONS
Play in the most important soccer competitions in the world: UEFA League, Cup, League, Champions League… and lead your team to the top of the worldwide football.
Change your club every season and feel the emotions of playing in other leagues.
Try the hardness of the English Premier League, or get fun with the technique of the Spanish La Liga, or feel the strategy of the Italian Serie A… Could you win the trophies of all the championships?

CONTRACTS AND SPONSORS
Negotiate a contract with a club and try to get the best deal. It’s the first step to reach a galactic contract and gain a lot of money, like a real soccer idol!
Shine like a star and the best sponsors will offer you succulents contracts, and will print their brands in your football boots and your soccer kits.
Get the best soccer kits, take care of your alimentation, try an epic pair of boots… The real soccer power will flow through your legs.

CLUBS AND SEASONS
Start your own football career in a humble club and raise up match by match to reach the most famous soccer clubs in the world.
Your football career has just begun in the 2016/2017 season, so score tons of goals and jump to a first division club in the 2017/2018 season.
Reach world fame through all the seasons: 2016, 2017… And prepare yourself for the FIFA World Cup Russia 2018!
How many seasons do you need to win your first league? And a Champions League?

MANAGER AND SOCIAL
Look after your relation with your coach, your fans, your teammates… To get a spot in the starting eleven.
Jump into the stadium and lead your soccer team to victory. Control every aspect of your line up like a real football manager.

LEVEL UP SKILLS
Different training modes: free kick, penalty shootout, assist the striker… Level up your soccer skills to be the new star of football.
Set wisely your team before each match and compete hard to reach glory with the best football manager game.
Free and easy to play soccer game: flick to shoot, flick to assist. Just one finger!

From the creator of Soccer Star World Legend, here comes Soccer Star 2017 TOP LEAGUES, the ultimate new soccer experience. As the main feature: Leagues! Play in the leagues from every country and lead your team to the top of the championship winning every single match of the season.

Begin your soccer career from the bottom. Sign with a second division club and begin your journey to glory. Compete with the best soccer teams and against worldwide known football players. Do you dare to face Cristiano or Messi? Train to improve your technique, shot and precision. That’s the only way to become an unstoppable soccer player.

Play in the most important soccer championships: UEFA League, Cup, League, Champions League… And lead your soccer team to the top. Take advantage of every opportunity to impress the sport press and negotiate galactic contracts and the best partners. Take care of your social relationships with your coach, team ands fans. Will you accept the FIFA World Cup challenge? It’s up to you.

Live like the soccer star you are destined to be. Buy luxury yachts, huge manors, fast cars… Soccer Star 2017 Top Leagues is the ultimate soccer simulator. Hire personal trainers and agents, get the best equipment for every season, fit your epic boots and nobody will stop your kicks. Take your best and turn yourself into a soccer legend.

2017 season has started and your time has come. Become a Soccer Star! 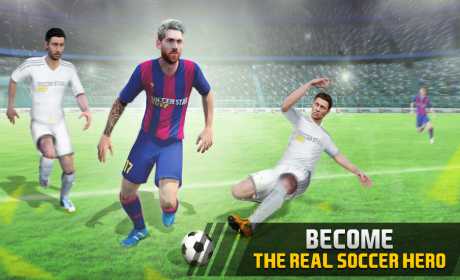 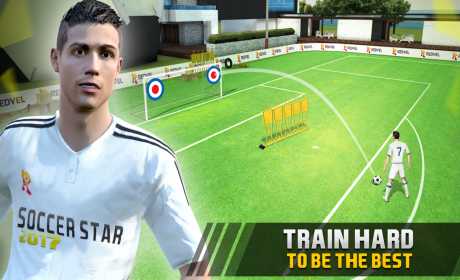 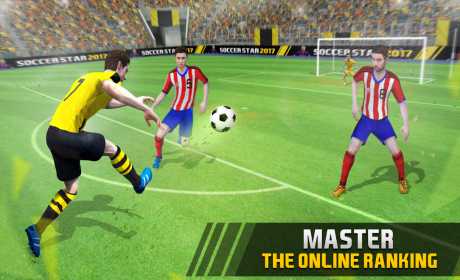