SkySafari 4 Pro is a education app for android

Now rebuilt for Android, SkySafari 4 Pro has the largest database of any astronomy app, period. It contains everything in SkySafari 4 Plus, and adds over 1.2 GB of data, including 25 million stars from both Hubble Guide Star catalogs, over 740,000 galaxies down to 18th magnitude, and over 630,000 solar system objects – including every comet and asteroid ever discovered. It simulates the view from anywhere in the solar system – or beyond it – at up to a million years in the past or future.

SkySafari 4 Pro includes NASA’s latest Moon and Mars maps, with 8x the resolution of any other SkySafari version. It’s an astronomical encyclopedia, with over 1500 encyclopedic descriptions of the constellations, stars, and planets written by professionals. And it includes 800 images from NASA space missions, the Hubble Space Telescope, and the world’s foremost astro-photographers – now in breathtaking high definition on your Android tablet!

All this is built into SkySafari 4 Pro – you don’t need an internet connection to use it. SkySafari 4 Pro will revolutionize your astronomical viewing experience, and replace desktop astronomy software costing ten times more. If you’re serious about astronomy, it’s a deal you can’t afford to miss.

* New look-and-feel, app icons, and artwork.
* Complete rewrite of compass code for much smoother and more accurate motion tracking.
* Google Maps integration: choose your location from a built-in Maps view.
* Animated meteor showers, with complete viewing information and spectacular graphics.
* New horizon panoramas: Yerba Buena Gardens in downtown San Francisco, Uluru (Ayers Rock) Australia, and the top of Mauna Kea on Hawaii’s Big Island. Or add your own!
* New and updated descriptions for hundreds of objects.
* Completely reinvented scope control panel. Up/Down/Left/Right controls only appear when the scope is connected, and big enough to be useable.
* Objects lists under Search are now sortable by name, number, magnitude, RA, Dec, and many other properties.
* New Advanced Search options let you find objects using properties other than their name. For example, you can find all objects of a certain type, within a certain constellation, brighter than a certain magnitude, etc.
* New Advanced Time settings let you enter a date & time thousands of years in the past or future, to the nearest second, or using Julian dates
* New Telescope Equipment settings let you enter a list of all your telescope equipment. Select different combinations of eyepieces and telescopes to display field-of-view automatically. Set up a separate camera and auto-guider FOV. All FOV indicators can be labelled in the sky chart.
* Now log observations of objects directly from the Object Info view, or show all your observations of any object at once.
* New Variable Stars list, containing the brightest and best-known variables in the sky.
* Added descriptions for hundreds of small moons, asteroids, comets, satellites; and many images.
* All full screen images in Object Info now include hi-res versions for the iPad.
* Database now contains Guide Star Catalog 2.x stars to magnitude 15 – total 25 million (up from 15 million in SkySafari 3 Pro).
* Database now includes the complete General Catalog of Variable Stars and Washington Double Star catalogs.
* Dozens more tweaks, bug fixes, and additions we don’t have room to list here! 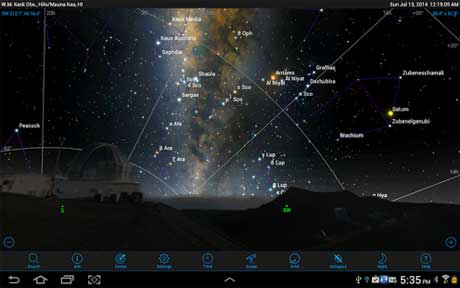 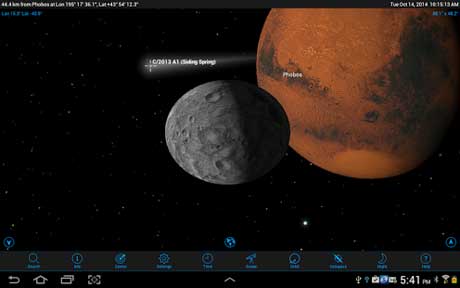