This is a tower defense challenge that lies in a magical fantasy world. Epic heroes fight in a war to defend the kingdom with top strategy and a rush of inspiration. Battle with Death Knights and fight alongside with knights, dragons, wizard, ice queen, and other ancient gods in the adventure field!

The forces of evil amass. Why do they march? Where is their home? No one knows. The prophets’ vision is cloudy. The geomancers see little in their maps. Everyone else? They flee. The Allied Kingdoms struggle to survive. Life and all its purpose has no meaning to these fiends. Fields rot. Woods burn. The common folk suffer. Devastation is happening! The Allied Kingdoms have one choice: defend, defend, defend. Are you ready?

Realm Defense is a tower defense game that challenges veteran players. Use a huge variety of powers and abilities to vanquish wave after wave of menace for over 100 levels. Travel through lush forests, snow covered mountains, and epic desert as you face off against armies of slimes, goblins, skeletons, and more.

• 100+ levels with various game play modes
• Multiple worlds to play with 4 different towers each
• Compete in tournament to show off your tower defense skills and win big prize
• Powerful heroes with unique abilities to aid you: Fee the Archer launches a deadly Kill Shot, Lancelot the Knight unleashes the Fist of Justice, Smoulder the Dragon rains down Heat Seeker fireballs and many more
• Face off against epic bosses including a Skeleton Mage that rides a giant slime and zaps your heroes and a bomb tossing, mammoth riding Goblin King
• Huge variety of enemies offer multiple challenges: Burn your enemy, freeze them, and more with 4 spells to cast in battle
• Beautiful landscapes and character animations

PLEASE NOTE! This game is free to play and made by people who love tower defense games. We sincerely hope you enjoy our work! 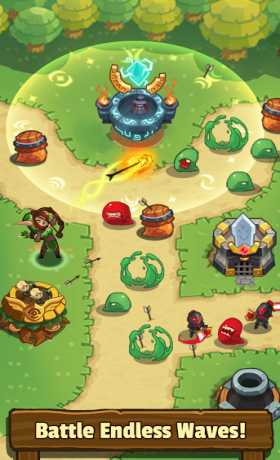 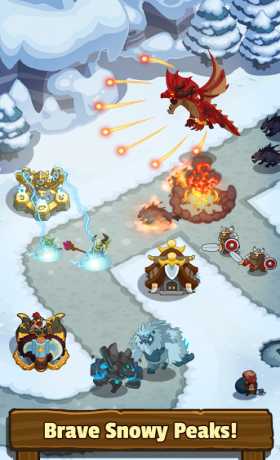 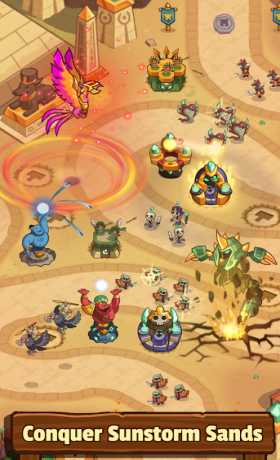