**Apology**Currently, when ‘ALL’ is selected in ARCADE MODE, some BGM are ringing differently than expected. We will clarify the cause and fix it soon.

TAITO is famous for arcade shooting games, and the RAY trilogy is one of its most beloved series! Its final work, the evolutionary evolution and the popularity of graphic RAYCRISIS appeared at Android application finally!! Arranged BGM is also recorded!

*Two Game Modes: Remix Mode and Arcade Mode!
-REMIX MODE is a special mode which adjusts the difficulty level according to the smartphone, plus its own arrangement on the map and sound! It is also possible to play only one designated stage for short play in the gap time!
-ARCADE MODE fully reproduces the excitement of the arcade! Completely captures the legendary arcade version original BGM! Although you can not stage select at first, if you satisfy the condition, you can choose your favorite stage composition from 42 combinations!
The conditions to reach final enemy and good Ending also conform to the setting of the arcade cabinet!

*Two Shooting Methods: Auto and Manual!
Auto mode gives you play with auto shot and auto lock on laser! You can operate easily and comfortably with a single finger.
-When impacted with special Attack gauge accumulated, Round-Divider activated by auto! You can avoid the shot of your aircraft!
Manual Mode is possible to switch on / off auto shot on / off. You can also control the launch timing of the lock on laser yourself, and you can aim for a high score as well as an arcade.

*Support Bluetooth controllers!! Joy-Con of the Nintendo Switch also can use!
Key configuration is also possible! You can place ‘Shot’, ‘Laser’ and ‘Special attack’ on your easy-to-operate button!
-Possible to select auto shot when using controller!
-When using the controller, you can change the speed of your own machine in Remix Mode from ‘Move Ratio’ of ‘OPTION’.

*Choose between three ships: the WR-01R,WR-02R and WR-03!
You can select and play your favorite aircraft from 3 types with different airframe performance.
WR-01R with high power of normal shots, WR-02R with many simultaneous lock ons, WR-03 with homing bullets, which aircraft to play with is up to you!
-WR-03 was a hidden aircraft, but in this app you can use from the beginning

*Fantastic BGM and SE are fully reproduced!
One of the highlights of the original RAYCRISIS experience was its sound design, perfectly replicated here under the supervision of TAITO’s ZUNTATA sound team. In addition to the classic soundtrack, this edition includes arrange BGM recorded in 2000 by TAMAYO!
-Unused song’Med-Ray’ that you only could listen to as sound track at that time is included as a title song!!

*Added a arranged BGM by YU SHIMODA(ZUNTATA) to ARCADE MODE! Enjoy the cutting edge ZUNTATA sound!
Using Option setting, you can choose Original BGM or Arranged BGM.
-Currently, you can listen surely by choosing the FUNCTION PART or INTELLIGENCE PART in the stage selection of ARCADE MODE. If it is from ‘ALL’, you may not be able to listen while the stage is randomly set.

*Vibration function compatible!
By turning on VIBRATION in OPTION setting, you can enjoy with vibration.
-The operation may become heavy depending on the model.

*Google Play Compatibility!
Individual rankings have been prepared for each ships and for each game mode.

**Nortification**
*This app is intended for the Android 4.2 or newer and mounted VRAM 2G or more. 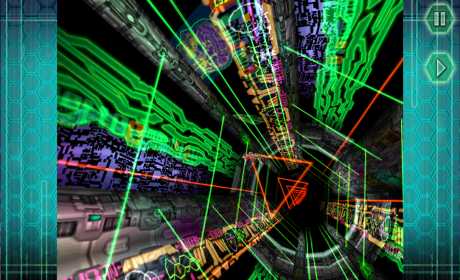 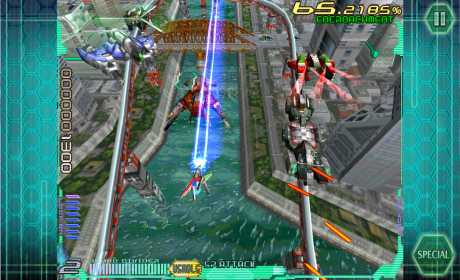 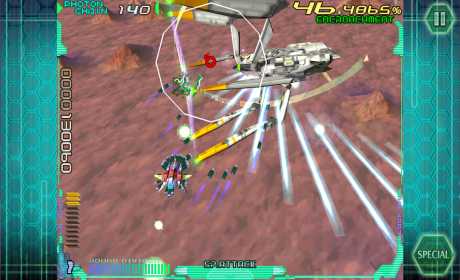