“4.5 out of 5 – …there are plenty of world conquering strategy games out there, but this one has a fantastically frenetic pace that is perfect for on-the-go gaming.” – TouchArcade.com

“Unlike other strategy games it gets your mind racing, reacting to what’s happening, and before you realise it’s all over and you’re raring to go again.” – Pocket Gamer

“Like Sid Meier’s Civilization on a sugar rush, Rapture: World Conquest accelerates centuries of global conflict into mere minutes for a super-fast strategy experience the likes of which I’ve never seen.” – IGN.com

The End is coming! Bombard the globe with devastating miracles and decimate the enemy civilizations. Guide your armies to dominate the planet and catch your people up to heaven!

Features
– Fast, simple gameplay – squeezing 3000 years of civilization into a 5 minute blitz
– Play against 3 friends online or over local wifi
– 12 devastating miracles to hurl down from above – Meteors, Earthquakes, Tsunamis, Volcanoes and others
– 18 civilizations to take control of and lead to victory
– Fast strategic action as you battle to control the largest number of regions before the end of times
– New civilizations, globe shapes, skies and atmospheres to unlock
– Dozens of achievements and missions to complete

Rapture – World Conquest is a fast paced real-time strategy game that puts you in the celestial shoes of a jealous god. Guide your followers through the ages and vanquish the unbelievers in the surrounding kingdoms. Send your armies to take over regions and expand your realm.

As your followers rise in numbers their adulation will provide mana allowing you to unleash devastating miracles – lightning storms, hurricanes, floods and other death from above. Conquer the globe and as the supreme deity you will lift your people up to heaven and leave your remaining enemies to the apocalypse.

Should you risk all on military engagements? On science and technical achievements? Or improve farming to boost productivity? Or perhaps your followers should spend their time praising you, giving you the power to unleash more miracles.

Inspired by classic god games such as Civilization and Populous, reinvented for short match times on mobile. There are dozens of missions, achievements and unlockable content.

You are a jealous god, wipe out the minions of your rivals, conquer the world and rapture your people.

We hope you enjoy playing Rapture – World Conquest! We are keen to hear your ideas for new features! Please get in touch. 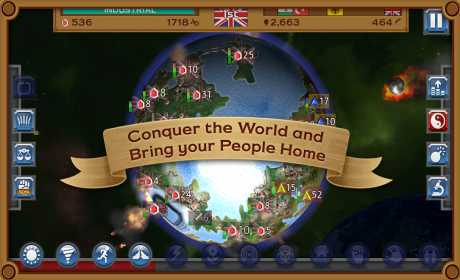 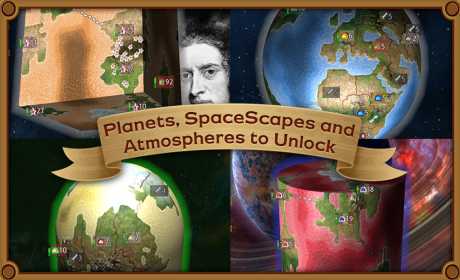 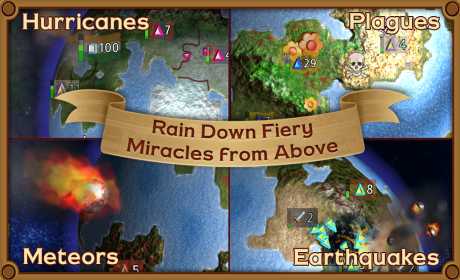