A new Ramboat shooter adventure, a new war where to prove you’re the hero soldier who will defeat the Coronel and his army! Discover a New action arcade experience full of guns and bullets! Collect weapons, upgrade and customize your soldier, drive military vehicles, get ready for the combat and enter the best platform shooter game! Escape from hundreds of enemies, jumping and dodging as quickly as possible. Do you like running and killing? Are you addicted to jump and shoot?

Survive an army of soldiers, paratroopers, rocket launchers and enemy submarines, dodge a hail of bullets while you unload all your arsenal on them. During your run, get power ups to increase your firepower and collect coins to upgrade your guns & craft new gears.

Make Ramboat unstoppable! Craft and upgrade weapons and gears with the gold you earn in each battle: shotguns, machine guns, rifles, uzis, rocket launchers. Shoot your best gun and destroy the enemy army! Armed from head to toe you will quickly run through the most dangerous combats. Customize your war hero with the fight item you’ll find in the battlefield, choose your outfit and improve your combat skills! Be a soldier legend!

Run, jump or roll, don’t stop shooting and perform an epic rush. Shot your rifle in slow motion and blow the enemy base with a grenade. In wartime, anything goes! Feel the blistering pace and the heat of battle in your hands. Assault all scenarios with your soldier hero and resist each challenge with strength. You have never seen before such an exciting and funny shooter game!

What is the biggest combo you can get? Complete all the missions and challenges to increase your military rank!

Rush through different STAGES and face CHALLENGES that increase the difficulty and fun: Destroy the enemy camp, deactivate a bomb, boss fights! The best endless shooter game!
Hundreds of quests and missions! Complete as many as you can to earn coins to buy new gear in the Armory, and gain exp to raise your level and your military rank.

POWERFUL ARSENAL TO UPGRADE
Tons of guns to choose. Collect blueprints and buy potent weapons like the homing missile, machine gun, flamethrower, classic pistol, laser and more!
Become a killer and shoot! Upgrade your guns and increase their power, shooting rate… Boost your firepower and hit the enemy lines!
Find epic gadget in the store and go to war fully equipped! Bring death to the enemies like a real special ops military soldier!

COLLECT ALL CHARACTERS AND BOATS
Try +12 unique band members, each with their special equipment and skills.
Race with +12 speedy and mighty boats like a luxury yacht, a pirate ship… or a shark! Can you collect them all?

FUNNY GAME MODES
Classic action adventure ARCADE style with original twists. The ultimate endless shooting runner.
Play with a friend in MULTIPLAYER and double the fun. Who will kill more enemies?
Do you want a challenge? Try the ELITE MODE if you have what it takes. Shoot and kill like a pro!

QUALITY DETAILS
Very easy to play and completely FREE!!
Simple and intuitive interface. Jump and shoot with one finger!
Awesome 2D graphics, with fascinating HD effects of light and color. You’ll love this runner game!
Brutal music and sound effects that make you run and jump even faster!
Sync with your Facebook or Google Play profile and share your score with all your friends!

Join thousands of players in this exciting adventure! You won’t stop shooting, jumping and killing. Play now for free! 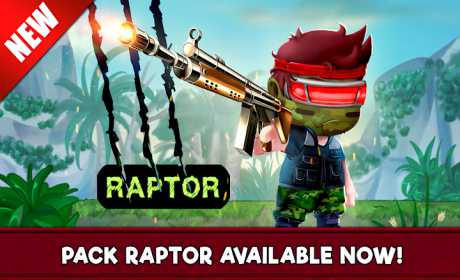 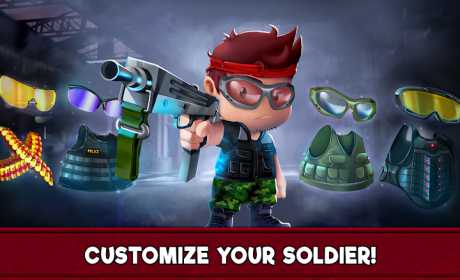 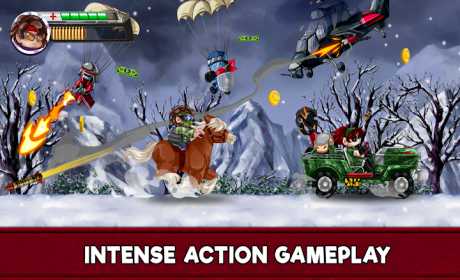