Project RTS is a Strategy Game for Android

=== Story ===
It is the year 2100 and Earth is rapidly running out of resources. In response to the resource crisis, the two most powerful corporations, BIOSPHERE and APEX, set off to lead a space expedition. To their amazement they discovered extensive resources on a strange planet far off of even the largest star maps. It contained precious exotic minerals whose energy levels were off the chart. This was earths answer.

BIOSPHERE immediately started mining in anticipation of the prosperity and promise that the minerals could have for Earth. However, APEX saw the minerals as a highly lucrative business opportunity and promptly declared ownership of the planet and its vast resources. They ruthlessly engaged BIOSPHERE’s forces intent on wiping them out. Only one corporation will make it back to Earth alive. The answer is up to you!

=== Description ===
MechCom is a new fast-paced stable 3D action RTS that is optimized for mobile devices. It’s heavily influenced by the popular open-source RTS, Warzone 2100 and Dune (But it is NOT an Android clone). It takes place in the year 2100 when two corporations (BIOSPHERE and APEX) go at it deploying powerful mechs and heavy hardware from the mothership in a classic RTS environment in the hunt for resources. It uses fluid touch controls that are aimed for simplicity and ease of use. Classic old-school resource collection mechanics are favored as well as simple clear graphics. There are a number of customized mechs you can build as well as various structures. There are also a handful of upgrades that you can utilize which can mean the difference between victory and defeat against a clever and challenging AI. Finally there are a large number of maps (zones) to choose from for Custom Games or you can go with a Ranked Game where the computer matches you to your skill level depending on your rank and how many promotion points you have earned to keep you challenged. 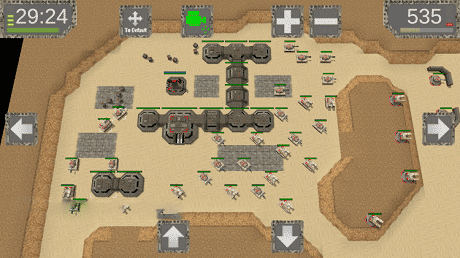 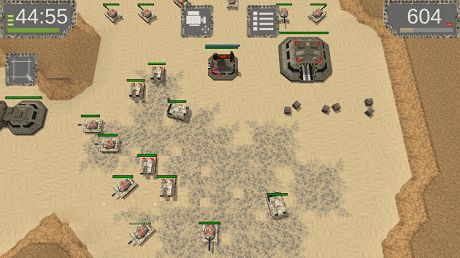 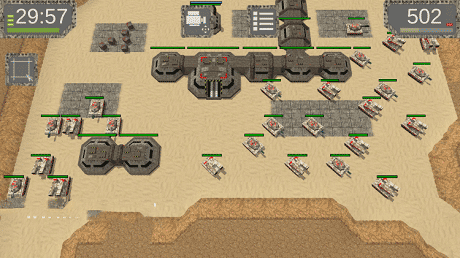