“Space is a dangerous place—and every second, threats from beyond the stars get bigger… So your mission is to keep up with the infinite invaders and endless fun of this idle tower-defense game!

Endless waves of space invaders will clash with you nonstop on their mission to attack Earth. Command your spaceships to act as defense towers and shoot ‘em down as you gather Gold. Over time, your foes’ power will grow more epic, but laser guns aren’t free! You’ll need to spend that Gold to upgrade the attack power of your spaceships to overcome bigger and bigger challenges.

But no matter your strategy, even the most epic tower defense is eventually doomed, and the aliens will get through… But that’s just the beginning of this nonstop battlefield!

Whenever invaders slip through your idle tower defense, the challenge resets; but each tower defense upgrade remains. That means you’re free to keep building each tower to shoot aliens with endless power and handle even bigger aliens than before! You can even close the game and come back later to gather your Gold. See just how strong you can get, and how many of the infinite waves your tower defense can hold off!

So assemble your star force and launch your epic space mission now!

• Command your space fleet on a nonstop mission to free Earth from infinite invaders, and become the Hero of the Galaxy.

• Your spaceships shoot even while you’re idle, but you can add the power of strategy by tapping the invaders you most want to attack and shoot down.

• Enjoy the addictive fun as you’re free to customize your tower defense and upgrade it to shoot the aliens with more power and unlock epic new strategy options.

• Collect a fleet of 20 spaceships for you to command and upgrade, each with its own unique design.

• Unleash over 6 epic attack powers to help you shoot down the infinite invaders from space. You might find the endless strategy of the stars addictive!

• A unique neon art direction for the aliens, your epic fleet of spaceships, and the endless stream of laser power from the clash between them.

• A colourful UI with one touch command controls that casual idle strategy fans will love.

• One touch lets you command all the epic action of your mission to free Earth from attack. 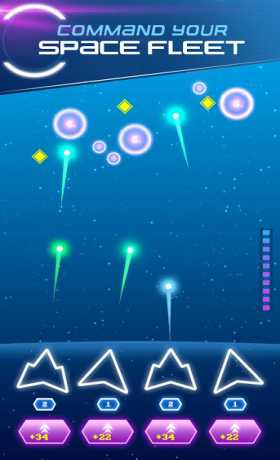 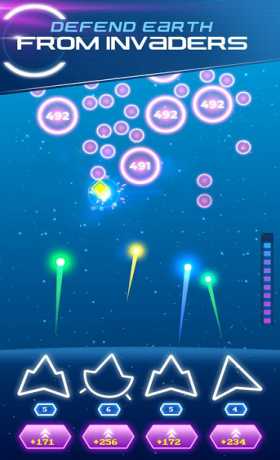 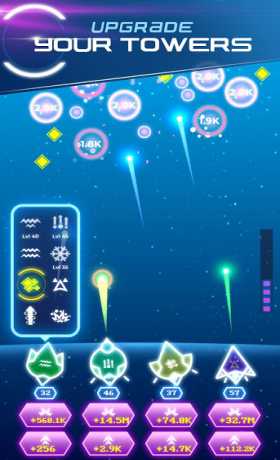