Mysteries of the Ocean v1.1 Apk for Android

Mysteries of the Ocean is a Arcade Game for Android

Remember classic vintage handheld electronic game where the wolf catches eggs? “Mysteries of the Ocean” is the game from the same series! This game was widely produced in 1980’s in USSR. Many boys at that time wanted to have this game in their collection, because it was so rare and exclusive. And now its time to get your hands on it on your Android device!

The principle of the game seems to be simple: you control a diver, who must collect the gold by going underwater to a sunken ship. But it’s not that simple: treasures are being guarded by a huge octopus, and you must avoid his deadly paws.

★ Amazing feeling of the original retro gameplay like never before!!!
★ Precise game logic emulation in Game A and Game B mode
★ Different realistic game console colors to select at your taste!
★ Game A, Game B, Time, Game Reset, Clock Alarm!
★ It can work as a Watch just like the original game did!
★ Increasing of gameplay speed is emulated in high detail when you earn more score exatly like in the original Elektronika device!!!

If you like the game, then you’ll definitely love our another games of this series! Check out that one also! And Good Luck!

Download last version Mysteries of the Ocean apk for android from revdl with direct link. 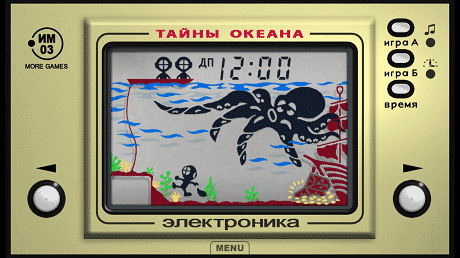 Mysteries of the Ocean v1.1 Apk for Android was last modified: December 27th, 2014 by RevDl

Slice It All Mod Apk 2.7.7 Hack(Rewards) for android