Author: RevDl 16 December 2014 Category: Action, Games
Modern War by GREE is an action game for android
Build a global military empire and destroy your enemies in Modern War by GREE!World Domination is now within your grasp! Join a faction and join the fight in Modern War, the popular combat game where you face off against enemies for control of country after country, until you rule ‘em all.

Taking over the world isn’t for the weak. Build strength in numbers by team

ing up with other players and pooling rewards from individual missions. Then, declare war against rival factions during monthly three-day World Domination events for the chance to put your name on the map—literally. Because in Modern War, it’s not enough to want power, you have to take it.

Features:
• Free-to-play MMORPG military combat game
• Form a faction with friends and other players
• Fight in monthly LIVE World Domination events
• Attack rivals for control of countries and territories
• Run a command center and build fortifications
• Get elected as a faction “Defense Leader”
• See your winning faction’s name on a world map

See what our players are saying:

★★★★★ Like Risk mixed with Command and Conquer! Fun game!
★★★★★ Fun and addictive game
★★★★★ Hard to put down once you pick it up
★★★★★ Great game that is always getting better
★★★★★ This game is unreal! Fun but WARNING, very addictive! Amazing game, keep them coming!
★★★★★ This is such an awesome war game, unlike anything I have installed! I can see my guy blow things up in 3D, no more text based menus!
★★★★★ If you’re into RPGs and turned based games, it’s definitely worth a download! Lots of depth and customization. Best of all, it has tons of missions and infinite configurations.
★★★★★ Addictive game. Fun fighting other players and seeing how people design their bases. Definitely a game of strategy vs a first person “gun game” like others but that’s ok by me.

See what the press is saying:

“A gleeful, mostly mercenary MMO take on modern armed forces that could blow you away…literally”

“This MMO is both hugely playable and brutally addictive”

“It’s surprising just how refreshing Modern War by GREE is. The gameplay will be instantly familiar to fans of games like Mafia Wars 2 and War Commander from Facebook, but the mix of contemporary combat settings and simulation/strategy make this a worthwhile pick-up-and-play option on the go.”

NOTES:
• This is an ONLINE ONLY game. You must be connected to the Internet to play.
• Modern War – World Domination is suitable for fans of strategy, rpg and mmo games. 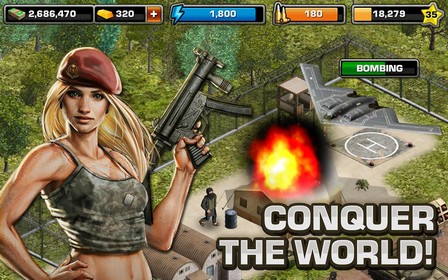 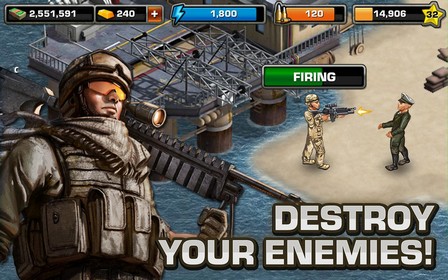 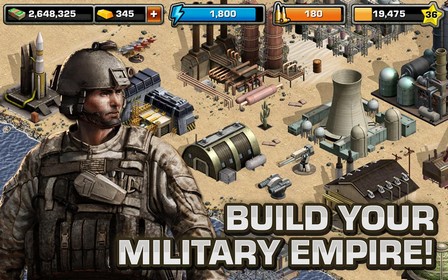