-==THE BEST RAILSHOOTER ON GOOGLE PLAY!==-
Say YES to the easiest shooter controls of all time! Shoot the bad guys, rescue damsels in distress, collect money and blow up the Wild West!

The wackiest shooter has no boring story, complicated controls, or irritating tutorials. Mad Bullets offers simple, high-speed, INSTANT ACTION for your enjoyment. Feel the arcades in your pocket!

Features:
√ The EASIEST shooter controls on any platform, ever!
√ The CRAZIEST characters since… we don’t know!
√ The MADDEST bullets in gaming history!
√ The…
…still not enough?
Oh, I forgot to mention that there are 3 locations, 50 levels, 4 minigames, 200 missions, 33 achievements, upgradeable equipment, Google Play Games support, trendy dubstep, fully destroyable environments, all mixed in a frantic endless shooter. Presented to you in 3D!

“This game is a great unexpected gem.” [vectorarchitekt]
“Mad Bullets (Free, Universal) is fun above all else to offer finely crafted arcade shooting action, fitted nicely to iOS for a great pick-up.” [Trevor Sheridan – Apple’N’Apps]
“Surprisingly Epic” [Hot touch]
“The music is sweeeeeeeet! the action nonstop, the most fun I’ve had with a shooter in years.” [dreadnok]
“The best shooting game on a phone I’ve ever played.” [Positive Souls]

Mad Bullets explained:
Mad Bullets is a modern homage to classic 3D light-gun games. Following the tradition of arcade-blockbusters like Virtua Cop, Time Crisis, House of the Dead, Point Blank and Lethal Enforcers, Mad Bullets makes the next step in the evolution of arcade action games. Reinventing one of gaming history’s oldest genre, Mad Bullets is set in a rich, colorful, detailed 3D Western cardboard world to match the mobile audiences expectations. Loaded with high-speed shooting action, destroyable objects, cartoon humour, deadly weapons, addictive gameplay, catchy sound design, and tons of gun-wielding cowboys, this game sets new standards in the league of Wild West themed arcade titles. If you love fast gun-fights, beautiful girls, Spaghetti Western movies, vivid 3D environments, or just like to blow up random stuff, then this is your game! At the time of release, Mad Bullets is one of the App Store’s highest rated new gun-game of 2014, and is now available to Android users on the globe. Don’t miss the chance and try out this Wild West shooter for your sake.

“Changed my rating from 4 to 5” [Crazyazus]
“Time Crisis/Virtua Cop for iOS! This is a well done shooter similar to the Time Crisis’ of old.” [WoolyNinja]
“BACK TO THE FUTURE” [Neto Chicago]
“The controls are great, the visuals and sounds are pretty good, the actual gameplay is tops.” [Exact-Psience]
“Do yourself a favor and hit the install app!!!!” [Pegleg Sammy]

Prepare your finger to make an awesome Western shootout. In this game, you can shoot nearly every single object popping up in the 3D setting, let it be an evil-cowboy, a rabid animal, a TNT-loaded barrel, or a flying bullet. Bring justice to the West! 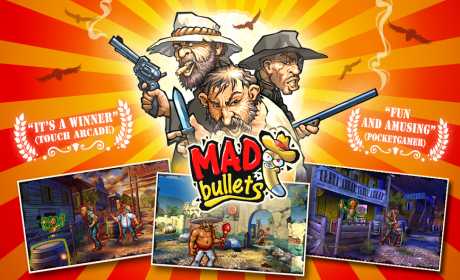 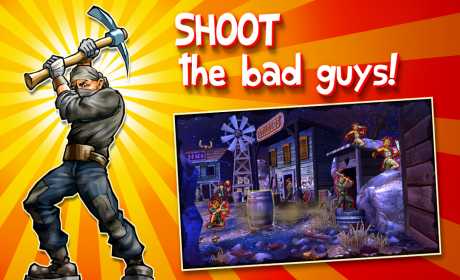 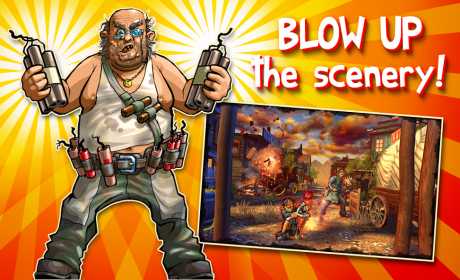