Battle the bad guys through NINJAGO® City in the free new ninja race combat game – LEGO® NINJAGO®: RIDE NINJA. Zane has gone undercover and infiltrated the Sons of Garmadon – a dangerous criminal organisation and biker gang in NINJAGO® City. The Titanium Ninja is on a mission to find out what the gang is up to, and has almost earned their trust but needs to pass one final test to become one of them – survive their dangerous initiation race, the Street Race of Snake Jaguar!

Playing as Zane, LEGO® NINJAGO®: RIDE NINJA sits you on the seat of his super-cool bike, equipped with a NINJAGO sword and shuriken, for an all-action ninja combat racing game. Zane knows this race is going to be tough as there are no rules, and the bikers like to play dirty. The Sons of Garmadon give chase – some ride motorbikes, Ultra Violet rides her Stone Booster bike and Mr. E’s devilish Oni Bike has deadly chopping blades with spikes!

Avoid the NINJAGO City traffic by tilting your device, get air on the ramps, dodge explosive mines and tap the screen to use your ninja skills to attack the Sons of Garmadon before they attack you! Pickups can restore health and build a power-boost giving a special attack for a short time. LEGO® Studs are earned as you play –  they can be spent on mystery bags that contain upgrade cards to boost weapons, armour, health and give special abilities. LEGO® Studs can also be spent on boosting upgrade cards and purchasing additional mystery bags.

How far can you race in RIDE NINJA?

Come play with us on LEGO.com/NINJAGO

LEGO, the LEGO logo, NINJAGO and the Minifigure are trademarks of the LEGO Group.

WHY PLAY WITH LEGO NINJAGO?

LEGO NINJAGO is an immersive story about good and evil, centred around a group of six young ninja, each with elemental powers, and their training in the capable hands of old Master Wu. Friendships are forged and evil enemies defeated in their battles to bring peace to NINJAGO Island – always with a balanced mix of danger, creativity, excitement and comic relief. Even enemies can sometimes become friends, just as friends can sometimes make mistakes. The role-playing opportunities are endless – almost anything goes in this fascinating, creative universe. 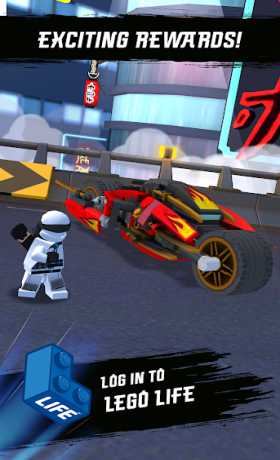 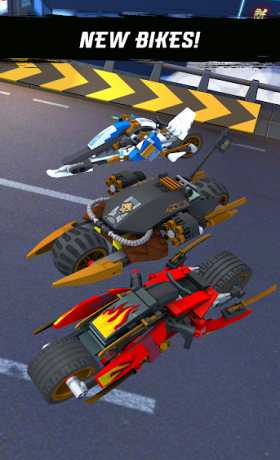 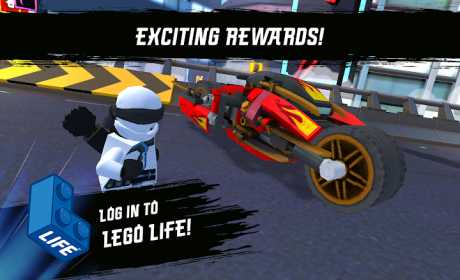