⚽Head Soccer Russia Cup 2018⚽is a free football game set in the football event of the year: the World Soccer Cup to be played in Russia in the summer of 2018. In this game you can take your favorite national team to the championship game that will be held in Moscow and be proclaimed the world champion of football. In Head Soccer Russia 2018 Cup you’ll find the top 32 players from all the qualifying national football teams in the world football cup.

Evolve the characteristics and skills of your players. Increase the speed and move faster on the football field. Practice shooting to increase your power, accuracy and score the decisive goal from the penalty spot. One very important feature in this football game is the jump, which improves your ball kick, enabling you to defend the your goals and shoot. Be the player to score the winning goal and win the biggest championship in world football in ⚽Head Soccer Russia Cup 2018: World Football League ⚽

Head Soccer Russia Cup 2018 is a free soccer game in which players have special shots. Recharging special bar shot through good movement in attack and defense and experience the special shots that will be hard defended by the opponent player. Amazing moves, chile, shots of fire, freeze your opponent, charring the contrary, freekicks … the possibilities are endless offer special shots within the game.

This football game has four game modes, each more fun thank the last, so that you can experience football from all levels; from a pro manager to an elite footballer. The first mode is LEAGUE mode in which you can measure up against the 32 national teams and play as a pro, fighting to win the tournament through regular competition. Choose among Latin American teams as Brazil, Argentina Mexico or Peru and their players; go to Europe to choose Germany, France, Spain or England or go to Asian teams and choose Japanese, Australian or South Korean footballers. Play with decision and win all the games with your national team!
You’d better not lose many matches to win the World Football Cup of Russia! Play the WORLD tournament, the CUP. In the CUP game mode, every game is a final to become the champion. Defeat all your opponents and pass through each round of the cup to end up winning the tournament.

Career mode is probably the most exciting. In in this mode you have to choose your favourite player and put them to the test in the top world football scene by winning games and points for their training, and improving their skills: shooting, jumping, free kicks and speed.

Finally, and no less exciting, is the friendly mode, where you can play fast football matches and live the full intensity of the beautiful game, becoming a total soccer pro.

In this free football game you can also customise your players using the professional player editor. Here, you can customise your soccer team by equipping them with glasses, wigs, hats, masks and the latest football boot models.

⚽ Head Soccer Russia Cup 2018 ⚽ is the best free game in World Cup. All eyes are focused on FIFA hosting you as a football player, and be the number one among the world’s international footballing elite.

⚽ Head Soccer Russia Cup 2018: World Football League ⚽ is a free sports game, however you will have the option to buy some items in the game in exchange for real money. If you prefer not to use that app function, please disable in-app purchases in your mobile device’s settings.

This app uses Wi-fi or mobile data (if available) to download game content and advertising. You can disable mobile data usage on this game from within Settings/Mobile Data. For a better experience, this sports game app includes tablet support to enjoy it with better graphics! 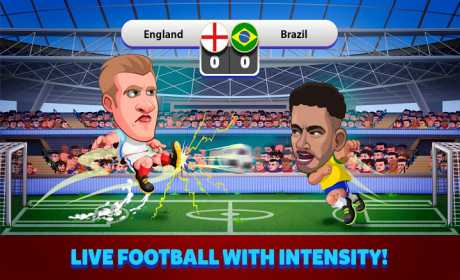 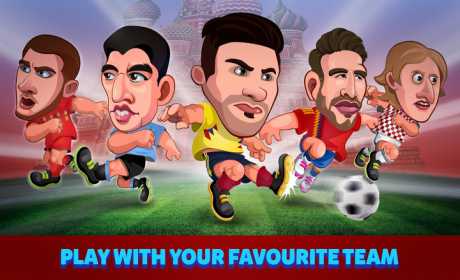 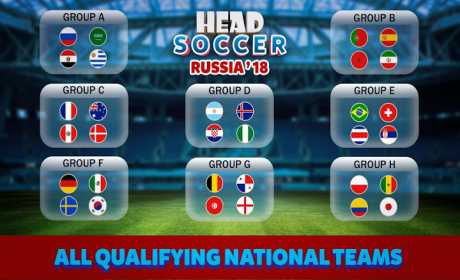