This mountain is rich in mystic gems. Combine gems to open up new rooms, providing new ways to dig up gems. Race against other players or race together against the clock to dig the greatest mine in this fast-paced, easy-to-learn strategy game.

FEATURES:
– Leverage more than 60 room abilities
– 20 unique player skills adorned with dwarven poetry
– Competitive, cooperative, and solitaire game modes (1-7 players)
– Online and pass-and-play multiplayer options
– Cross-platform multiplayer (mobile and PC)
– Play a quick game and watch the action unfold, or play an asynchronous game where you only need to take one turn per day
– 3 levels of AI to play with or against
– Faithful adaptation of the Gem Rush board game, programmed by the designer

HOW TO PLAY
On your turn, move up to 3 steps in the mine, then do one action.

Building Rooms
Building rooms is the main way to score points! If you move into a room that doesn’t exist yet, you have to build it. Spend cards from your hand that include all the gems on the door you’re building. (Most cards have 2 gems, and can be spent as either or both!) Choose the rotation of the new room and add it to the mine.

Collecting Gems
For your action, use a room’s special ability to draw more gem cards. Different rooms have different rules for drawing cards, so choosing the right room for your situation is key! (If you can’t find a useful room, you can always draw a single card instead.)

At the start of your next turn, if you have more than 4 cards, you’ll have to discard down to 4.

Winning
In Rush Mode, the players race against each other. Have the most points at the end of the round when anyone reaches the point target.

In Crisis Mode, the players race against the clock. You’ll be forced to “burn” cards from the deck every turn, removing them from the game. Reach the target score before the cards are all gone! 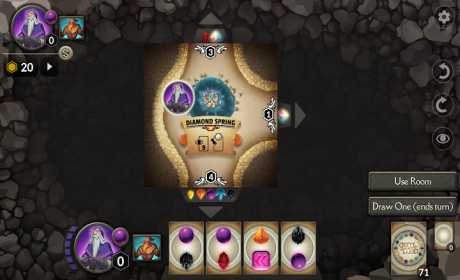 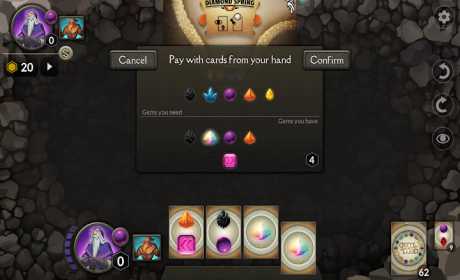 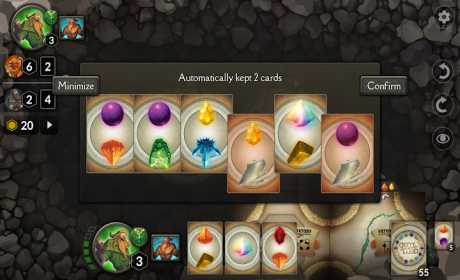