Fist Of Jesus is an arcade game for android.

FIST OF JESUS: THE BLOODY GOSPEL OF JUDAS, a hilarious gore beat’em up.

***What users say: “Holy cow, this is by far the most divine brawler I’ve ever played, way cool”.
“Awesome game. Graphics are beautiful, dialogues are hilarious and the gameplay is like going back to the early ‘90s.”
“Two words: Holy punishment”. “This is a GOTY of GOTY”.

***
Humor meets gore in the game based on the epic award-winner short-film Fist of Jesus.
An absolutely unique parody!

Fist of Jesus tells the adventures of Jesus and Judas, where the world is now full of Zombies caused by something going wrong during Lazarus’ resurrection. Comedy, Cowboys, the Roman Army and Mythological Creatures packed with endless fun.

What else could you want? 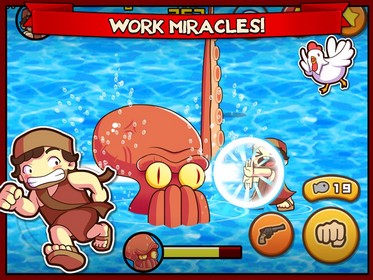