Non – stop robot wars: Tap, click and thrash Titans in this awesome tap game. Win the endless war of heroes in one of the best clicker games.

Participate in this endless war with robots by building your gang of fighters and warriors in one of the most interesting tapping games. Be the ‘Big’ hero in this titan quest to defeat the most difficult bosses and save the world in one of the most unique endless war games! A superhero like Batman or Superman would never be a match to your troop of click heroes in this tapping game! Thrash Iron Kill Robots in this game!

• Tap Tap to hire 20 unique tiny titans to fight against the robots in extremely difficult hero wars.
• Click heroes and progress through hundreds of levels in one of the most interesting idle clicker games.
• Tap to destroy 36 unique robots in this endless war with mini heroes that you upgrade your click heroes and make stronger every day.
• Tap Tap the tiny heroes to collect amazing rewards by winning hero wars in one of the most exciting clicker games.
• Play offline! You can lead your soldiers at home, on the road or anywhere. Internet is not required to play this endless superhero rpg games. All you have to do is click heroes in this game even without internet and master one of the addictive tapping games.
• Destroy the Iron giant Robots quickly to keep your squad’s health intact and help them fight longer in this RPG clicker game
• Pocket heroes!, Relax, sit back and play. All you need to do is tap in this tap game.
Are you up to face the endless war? We promise this will be one of the most unique hero games that you would have ever played in the tap game category this 2017!

STATE OF THE ART ROBOT DESIGN:

In this clicker game, you will see the latest design of robots which were created with a lot of attention to detail to make it one of the most visually appealing hero games.

Get hold of powerful ammunition like Machine guns, Automatic Machine guns, rifles in one of the most powerful click games where the roadblock is an endless frontier.

Want to be GOD for a while and not face any heavy damage, turn on the Ultimate GOD mode

Toughest BOSS Battles:
If you thought Boss battles in other tap games were difficult, well, you haven’t met IRON Giant’s bosses! They have been designed to be from easy to super tough over the span of your gameplay! The click games genre taken to another level of difficulty.

Ever wanted to deploy missiles and rockets to crush your enemy to dust? Well, in Iron Giants, you can launch missiles at the enemy Robots and defeat them by depleting their health to null.

BUILD THAT UNSTOPPABLE TROOP OF FIGHTERS:

As you level up in the Iron giants game, you will unlock fighters who will join you in the quest to defeat every robot that stands in your way of protecting the world from destruction! Our fans think the variety of fighters with you as the clicker hero is what makes this game special.

YOUR TROOP’S AUTHORITY IS WITH YOU!

Are you ready to be THE HERO in this tapping game? PLAY NOW!

Ever wished to be a clicker hero and save the world from the attack of the Robots? Then Iron Giants is one of the superhero games that you need to play! It has been rated as one of the top tap games by the rpg clicker game audience.

Time to pass the endless frontier among all rpg clicker game / tapping games by being the clicker hero.
The Tapping games genre awaits the new leader in the Iron giant game!

Slash mobs of Robots in this non – utopia world! Tap on Titan robots who literally as strong as Juggernauts! Can you be the knight in shining armor or the hero that can win wars against robots? 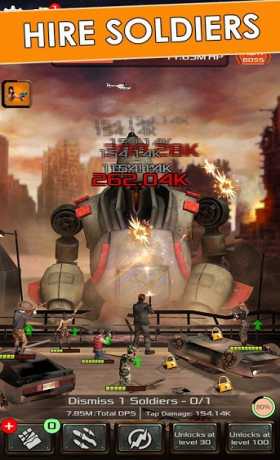 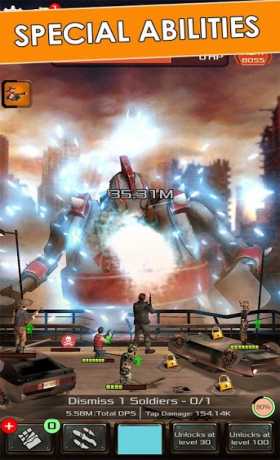 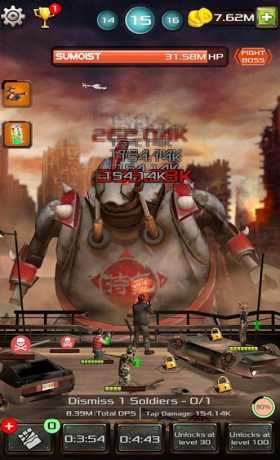