Drops takes “boring” out of language learning: useful vocabulary is beamed into your memory via gorgeous minimalist illustrations and fast paced micro-games.
The fun part? It only takes 5 minutes a day. In fact that’s all the time you get! Insane? Yes. Works? Absolutely!

👀 Drops is 100% visual: We use pictures to directly connect the meaning to – not to your native language! No middleman. Quicker, better and more fun! 🙂
🏎️ 5 minute session limit: limiting learning time may sound counterintuitive but it makes Drops incredibly addictive which is not a bad thing when we talk about language learning. The barrier of entry is nonexistent. No excuses: you ALWAYS have 5 minutes!
🕹️ Effortless practice: We took a good look at why games are so fun and addictive and injected the essence into Drops to create an app that is freakishly immersive but in this case you don’t waste your time playing instead you build a valuable asset: knowledge of a new language.
⚡Rapid pace: We believe in quick pace and typing on your phone’s keyboard is nothing but fast. Say hello to rapid swipes and taps! You’ll need those extra seconds to get the most out of your 5 minutes 😉
🎯 Vocabulary focus: No grammar, only curated words with high practical value. Drops focuses on one thing and it does it extremely well. Drops also teaches “alphabet” courses for beginners in Korean, Japanese, Chinese, Hebrew, Arabic, Russian and Hindi.
💁Forge learning habit: Drops wants to convert you into a language learning addict. No matter how effective your learning tool is, if you don’t use it on a daily basis, it doesn’t really matter. Drops tricks your mind and you’ll be better for it!

Languages in Drops
We are proud of the wide range of languages that you can learn with Drops and we are adding new ones nearly every month. Besides the usual suspects such as English, Spanish, French, German, Italian, plenty of exotic ones are available too: Japanese, Chinese, Korean, Arabic, Hebrew, Portuguese, Russian, Danish, Hungarian, Hindi, Tagalog or Icelandic!

🆕 We recently introduced dialects too! No you can choose between Mandarin Chinese & Cantonese Chinese, Castilian Spanish & Latin-American Spanish, American English & British English and between European Portuguese & Brazilian Portuguese. You can even learn each language simultaneously for free!
We are extremely proud to our beautiful word pronunciations recorded by voice actresses and actors!

Drops offer a complete package for free for casual learners: 5 minutes of blazingly fast and epic fun learning per day, more than 1700 words in 99 topics. More dedicated language learners can subscribe for premium features to achieve much faster progress and of course provides unlimited learning time.
🌍 Our mission at Drops is to empower people of the world with the gift of language knowledge via a special tool that uses the universal language we all speak: images.

p.s.: We take full responsibility for the potential addiction to language learning. 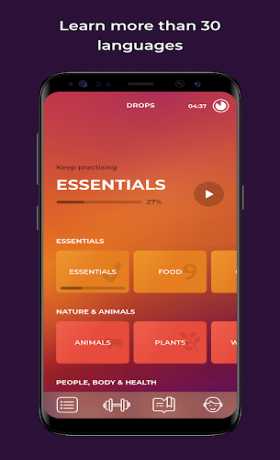 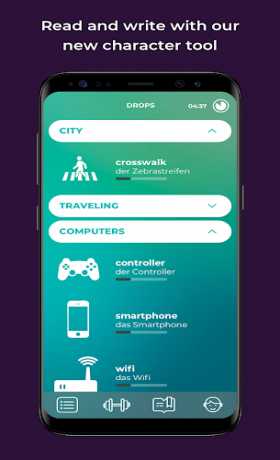 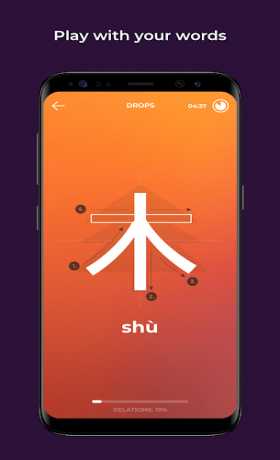