Ride the rails with Wilson, Brewster, Koko and newest addition to Chuggington – Chief of Chug Patrol – Jackman, in this traintastic interactive adventure! Read the story, complete the challenges, and use your new skills to win special Chug Patrol badges. Perfecto!

Chug Patrol: Ready to Rescue is an official Chuggington app which looks and feels just like a real book. Watch and listen as Jackman narrates the story, then turn the page to see each 3D pop-up scene magically unfold!

Do you have what it takes to be a Chug Patroller? Take part in the action to find out! Packed with games and activities, you will:

● Keep the track safe by clearing logs. Safety first!
● Help Wilson catch runaway wagons with Chug Patrol 1, the Claw Car.
● Rush to rescue Koko from the collapsing mine tunnel.
● Lay track with Brewster and the Chuggineers.
● Learn how to be a high speed Chugger with Koko and leader of Speed Fleet, Hanzo .
● Clean up messy Chuggers in the Chug Wash.
● …and much, much more! Wowzer!

In Chug Patrol: Ready to Rescue, you can join the Chuggington trainees as they move up to advanced training and set out on their most exciting adventures yet. Put your bravery to the test and become a trainee Chug Patroller just like Wilson. Explore the rails with Koko as she trains for Speed Fleet, and help Brewster prove he has the strength and determination to become a hard-working Chuggineer.

Get ready Chug Patrollers! YOU are in control and ready to roll!

KEY FEATURES:
· The official app of Chuggington’s Chug Patrol: Ready to Rescue extended episode
· Features the newest Chuggers of Chuggington – Jackman, Zack and Hanzo
· Full 3D experience – it’s just like a real book
· 21 pages of exciting story, animation and illustrations
· 9 3D pop-up scenes with interactive games and activities
· Positive reinforcement for ready and playing along. Win a Chug Patrol badge when each game is completed
· Read to me, Read it Myself and Autoplay modes
· Features a fantastic musical score and lots of traintastic sound effects

“I wondered who was going to get pop-up books right, and StoryToys wins by a long shot”
~ David Winograd, TUAW

“StoryToys has near-brilliantly rethought children’s books… …this application evolves the very concept of what a story can be.”
~ Jeremy Horowitz, iLounge

Don’t forget to share your review, we’d love to hear what you think!

__________________________________________________________
ABOUT CHUGGINGTON:
Chuggington is a contemporary, action based, energetic and vibrant CGI series for children aged 2 – 5 years. The series follows the adventures of three young trainees – Wilson and his friends Brewster and Koko – as they ride the rails and take on exciting challenges that test their courage, speed and determination. Along the way, and with help and support from a strong community of engines and people, they learn positive values and new skills empowering them to become the best trainees they can be. Chuggington is directed by Sarah Ball, who won a BAFTA award for her work as a director and writer of Bob the Builder ™. Further information is available at www.chuggington.com. 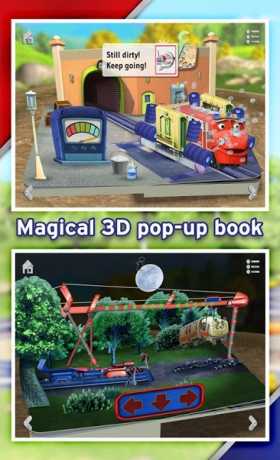 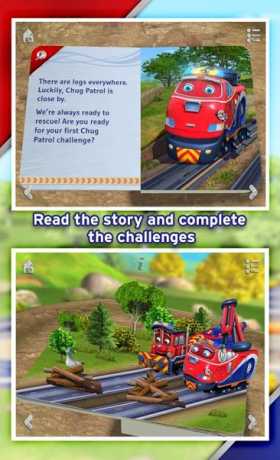 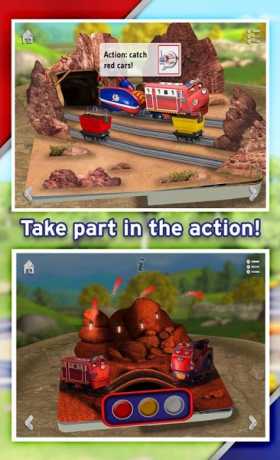