Bloodbones is a Role Playing Game for Android

Set off on a journey of revenge against the dread pirate Cinnabar, who killed your parents, and sail the high seas!

The dreaded pirate-lord Cinnabar, scourge of the twelve seas, plagued the seafarers of the Old World in a bloody reign of terror until a brave adventurer put an end to his evil. But now he is back from the dead, seeking revenge, with the dark powers of voodoo at his command.

A fantasy adventure from Steve Jackson and Ian Livingstone in which YOU are the hero!

• Make the gamebook as easy or hard as you like and even turn on a special cheat mode to read it old-school!
• Choose between full colour images, or toggle between the black-and-white originals from the print edition!
• Use unique weapons like the Throwing Knives and Gas-Globes for added strategy in fights.
• Race against the clock to complete your quest!
• Plot your journey along the map as you travel to new locations.

• Read the book horizontally or vertically on your tablet.
• An automated Adventure Sheet to keep track of stats and inventory. 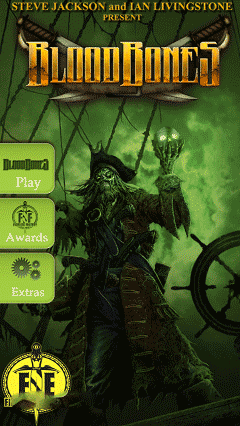