Quick! Sit down and start tapping!

Bitcoin Billionaire is an idle clicker that’s all about raking in bitcoins and building up a massive fortune! You start with almost nothing: a run-down office, a rickety old desk, a crummy computer. By tapping the screen you can mine virtual bitcoins and slowly increase your wealth. Spend digital dough to upgrade that awful furniture into swanky things like entertainment centers and priceless works of art. If you’re smart (which, you are!), you’ll spend some of that money on investments to help you earn while you’re away. And don’t worry, investments aren’t as boring as in real life. How could robot butlers, virtual reality, and holographic dating be anything but awesome?

Oh, and one more thing: there’s time travel. When your tapping skills reach a critical point, you can actually rip through the fabric of space and time, jumping to a new era where you’ll earn all new upgrades, unlock new achievements, and experience the thrills of bitcoin mining from a whole new perspective. If you thought tapping was fun in a comfy modern day office chair, just wait ’til you park your posterior in a finely crafted stone seat from prehistoric times!

Features:
– Supremely satisfying bitcoin tapping action!
– Upgrade investments to earn bitcoins while offline.
– Grab bonuses from special delivery drones.
– Customize your character to mine in style.
– Unlock achievements by being awesome.
– Adopt a kitty! Or a robot! Or a T-Rex! Or something else, maybe! 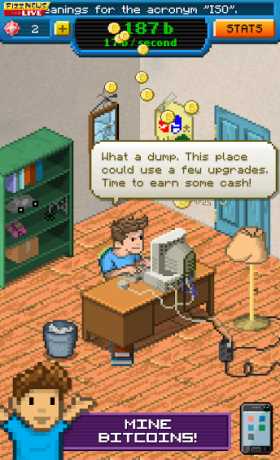 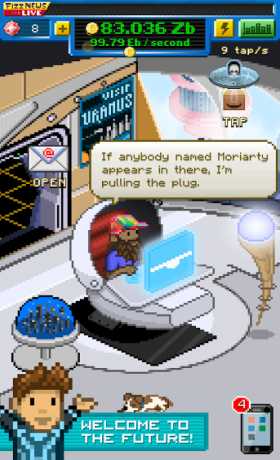 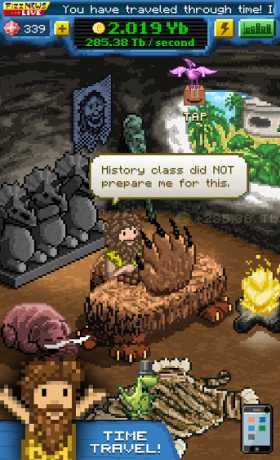