Are you Badass enough to save the world?!

Choose one of 6 awesome action heroes and begin an endless run-and-gun adventure to free Earth from alien invaders!

You’ll laugh at the wild comic characters as you jump from one action-packed shooter stage to the next in Band of Badasses! So whether you prefer blasting aliens in the face with your rifle or slicing them to pieces with your katana, or a variety of other attack styles, you can unlock your favorite Band of Badasses characters and run with them on your mission of mayhem and fun!

FEATURES:
– Play as 6 iconic characters that make up the Band of Badasses roster to rediscover archetypical action movie and comic heroes from the ‘90s and 2000s. Each one has their own offbeat style and personality!

– Run and gun your way through treacherous obstacles and endless hordes of aliens that you must kill to collect Medals.

– Load up on potent power-ups that show you’re not just playing games here. They’ll help you reach new heights of heroism as you kill more aliens, ignore death and rack up the highest score possible as you free humanity!

– Enjoy the most fun and easy-to-learn controls of any game you’ve played! Tap with one finger to jump, double-jump, dash and avoid the game’s obstacles!

– Your shooter will free-fire and run automatically, which leaves your other hand free to give a big surfer “hang-ten” sign as you play!

– Gun it across wild and whimsical environments, from the Jungle to the Desert and even an alien Spaceship, all presented in beautiful 2D graphics!

– Set a high score on the Global and Friends Leaderboards to show people who’s really saving Earth from invasion!

Don’t wait! Jump right into this massive temple of fun now and enjoy Band of Badasses for free! You’re sure to get hooked on the non-stop action that you can play anytime!

Band of Badasses is the perfect game for fans of fun, free shooter games with cool characters that are easy to play while on the subway, waiting for the bill, or whenever you need to kill some time. You’ll enjoy the game’s endless laughing moments. 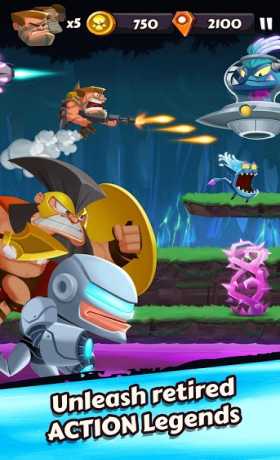 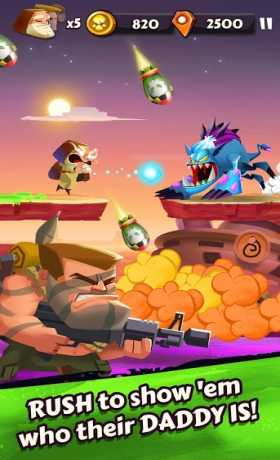 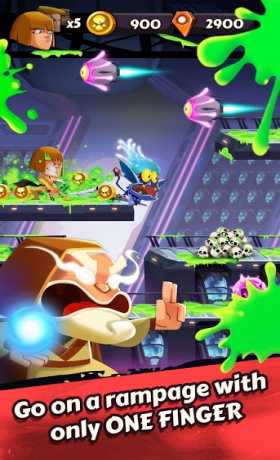