All Guns Blazing is a action game for android

Pull the trigger on All Guns Blazing! Crime isn’t a game, it’s a way of life – so grab the all new social 3D crime shooter that will blow you away!

Climb the criminal ranks, join a cartel and smash the competition. Create or join cartels to take down tough Raid bosses and attack other players’ bases in PvP mode – America is yours for the taking! Raid banks, armored cars and businesses to steal cash, gold, anything and everything of value. Use what you’ve stolen to build your own criminal empire. You want guns, you want property and you want to look good doing it!

Start out small and expand until you’ve taken over the entire US and attack other players’ safehouses in Mexico. You’ll need help, so join a criminal Cartel with other players and help each other towards that one big score. Work together to take down mob bosses, destroy businesses and ensure your domination. There’s only room for one at the top – make sure that’s you and your cartel!

Note: A network connection is required to play.

FEATURES
* Epic shoot-outs in beautiful 3D environments – it’s almost a shame to shoot them up!
* Player vs Player Mode! Attack other players’ bases and steal their loot!
* Join a Cartel and work with other criminals or work against them – play how you want to.
* Build and expand your empire on a fully interactive 3D map.
* Hundreds of weapons, gun parts, clothes, valuables, properties, stats, boosters – the list is endless!
* Take on hundreds of crime jobs – each with their own incredible loot rewards.
* Mod your character – look cool or just look messed up and terrorize the opposition!
* Factory guns are dull! Make your own guns, make them over the top, make them the best!
* Swat, rival gangs, bosses, tanks – take them all down in the most action packed shooter available.
* Join the exclusive VIP membership club to get some kick-ass perks. If you’re name’s not down you’re not getting in!
* Epic destruction – if you can shoot it you can destroy it!

All Guns Blazing is completely free to play. However, some game items can be purchased for real money. If you don’t want to use this feature, please disable in-app purchases in your device’s settings.

If you have any suggestions or encounter problems we’d love you to reach out to us at http://forum.eightpixelssquare.com/ 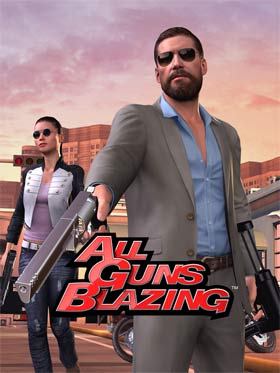 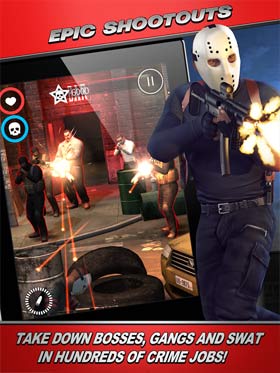 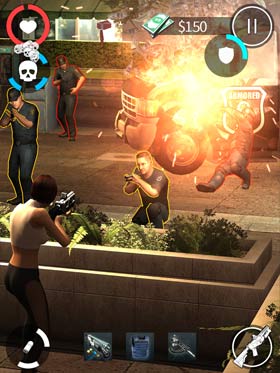